I caught up with Tai and Kat this afternoon. They're both doing amazingly well. We chatted for a bit then to my utter surprise Tai asked me to push over his walking frame ! Sure enough, he got to the side of his bed, pulled himself up and off he went. He wouldn't have made the finals in Delhi, but it was only 48 hours after a major 7 hour operation !.

He asked me to put up the post op xRays - I think that you'll agree that it's bizarre... in a very good way. 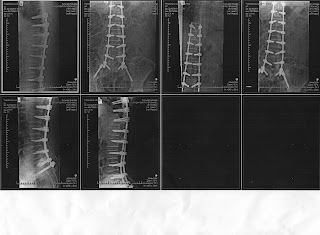 I'll leave it to Gaz to tell the full story, but each image above is half of the wee mans back - so where we had thought they would put in support for the bottom 5 vertebrae, it looks like they did a fair bit more than that.  I found this (mainly coz I wanted to ensure that I spelt vertebrae correctly !) ....

Tai loves the emails and txts (kinda keen on the meds also) - so keep throwing them through.
Posted by Unknown at 10:57 PM

Thanks for your comments Gaz