Information made the difference
Gary is a successful businessman who is married and has three teenage children. He is also someone who can tell you everything you need to know about synovial sarcoma – a rare form of soft tissue cancer.

A year ago, Gary, founder and CEO of Enabling NZ, had a sore back but having had prior back problems, put it down to a pulled muscle. However after intensive
treatment with massage, acupuncture, medication and physiotherapy his doctor sent him for further tests.

By the time Gary had a scan in June 2010, a large lump was visible on his back. An MRI scan identified it as a tumour but it was unclear whether or not it was malignant.

“By this time I couldn’t drive or sit and it was very painful,” says Gary. A visit to the doctor on a Friday evening saw him booked in for surgery the following Monday morning.

“I knew it was very serious, I walked out of my office and haven’t been back to work for nearly a year.”

Gary says he was initially frustrated about the lack of information about his condition. Without information he says, there is no path forward, and not knowing what they were dealing with made it hard for him and his family to be positive.

“When they removed the tumour and told me it was a synovial sarcoma I was relieved. I went from not knowing, to knowing more. It wasn’t positive information, but at least it was information.”

The provision of information is one of the areas in which the Cancer Society has been able to help Gary. Its website has good links to supportive information, he says, and patients and their families are given relevant information packs.

Post -surgery, Gary underwent a gruelling regime of treatment. Halfway through it, he didn’t think he would get to the end.

“The Cancer Society funded counselling for my wife and I. This gave us strategies to deal with the tough situation we were going though. It was fantastic.”

Gary’s positive attitude has played a big part in his recovery. He began blogging when the tumour was first discovered. He says it was therapeutic and he enjoyed engaging with others who had sarcomas. “A lot of blogs were stories about dying, I wanted to share a journey of living. I wanted to go through it and come out the other end and say I survived.”

Gary now has a spine full of titanium rods. He has learnt to walk again and says it’s time to celebrate. After months of surgery, rehabilitation and 18 weeks of chemotherapy his results are positive. By the end of July he plans to hit a golf ball 210 metres, use his chainsaw and go to a great party.

Gary will be making a donation on Daffodil Day, Friday 26 August. Funds raised help the Cancer Society support those with cancer and their families, and also go towards research into the causes of, and treatments for, cancer. 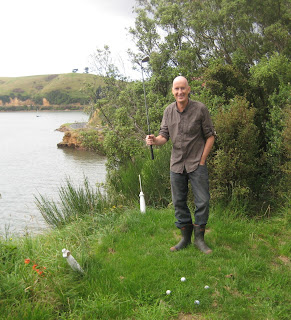